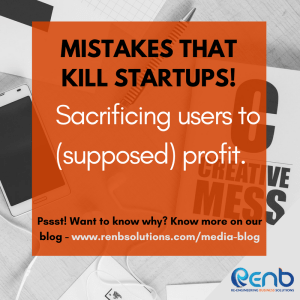 Your focus as a startup should be on generating users and not a profit. This doesn’t mean you ignore the financial side of things – but only that you keep it for later.

Startups often get hung up on trying to make money. What they fail to see is that the simplest way to do this is, by solving a problem. It sounds pretty easy, but oddly, there are only a few startups that actually succeed in figuring out what it is that people WANT really. The moment you have this covered, you can then focus on the business model. Keep the profit making discussion for later.

Paul Grahams simple ideology should be taken into consideration here.

How To Create Wealth = (How Much People Want Something  X  How Many People Want It)  – Now turn that number into wealth. Companies that put their users first, tend to do better. The happier the users, the happier your sales, and the happier are you.